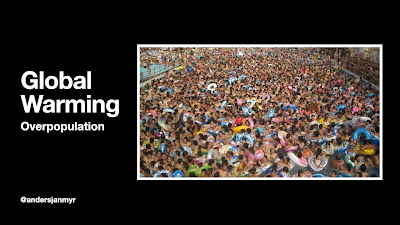 COP27 is coming up. One topic that wasn't negotiated in COP26 was population. Currently, global population is increasing with 80 million people every year.

Smart and influential people argues that aging population is a way bigger problem than over-population since new generations will not be able to support their elders and keep up progress.

I believe they are mistaken in two ways:

Kimberly Nicholas, PhD in Sustainability Science, argues that one of the four most impactful things we in the over-consuming world can do o lower emissions is to have less children.

This should not only apply to the over-consuming world, since people in developing countries tend to migrate to developed countries and hence become high emitters like the rest of us. 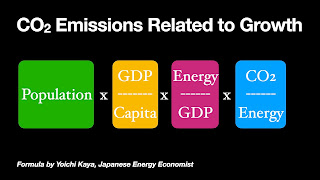 There is a simple formula for calculating global carbon emissions in economic terms. It is called the Kaya Identity Scenario Prognosticator and it is named after it's inventor, Yoichi Kaya, a Japanese Energy Economist.

Lowering any of the four categories, will lower our Carbon emissions. Getting any single one of them down to zero will completely stop our emissions. 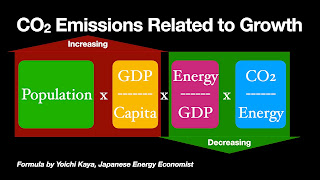 Currently, two of the categories or decreasing while two are increasing. It's not hard to understand that this is not an optimal solution.

Carbon Emissions per Unit of Energy Furthest to the right, we have Carbon Emissions per Unit of Energy. This is the one most of the fuzz is about. How can we lower the amount of carbon emitted per amount of energy. The answer is simple, but the implementation is not. We need to replace fossil energy with fossil free energy, solar, wind, biofuel, and nuclear. The only controversy is nuclear which I will not dwell on since I already wrote an article on how I think we should go all in on Nuclear. But, thankfully not every country are as squeamish about nuclear as we Swedes and the Germans are. France is leading the charge and China is planning 150 new nuclear plants.

Energy use per GDP, efficiency 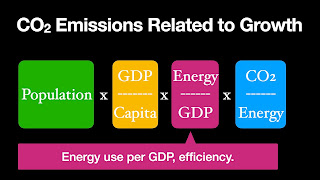 This is how much energy we get for every dollar we spend. This is also called efficiency and it's something we are very good at. We keep making better motors, batteries, production methods, etc. There is nothing controversial in this area. We would do this anyway since it is good economy to be efficient. 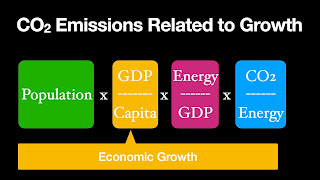 This is where the controversy starts to grow. Economists wants growth to be high since it will allow TODO, while many ecologists wants to stop growth (at least in the developed world) since they don't think it is sustainable. I agree that in the developed world, we certainly have room to lower our consumption, but I'm not sure what it would do to our economy since so many things are based on this ever increasing growth. But, most of the world just want to reach a level that doesn't force them to struggle every day. This is a tough nut to crack. 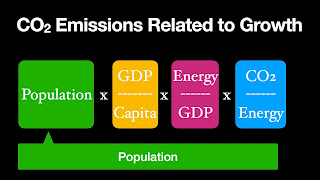 Finally, population. It's increasing by 80 million people yearly, and it's expected to peak somewhere around 10 billion people. This is an immense problem that it seems that no one wants to talk about! It's an ecosystem out of balance. 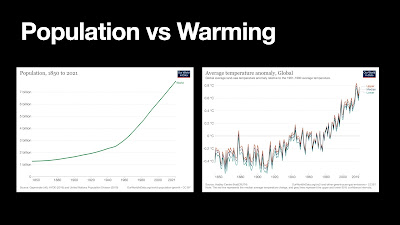 It is eerie how much population correlates with temperature. 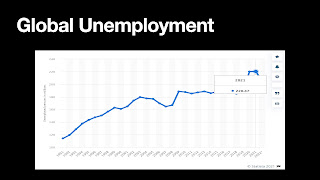 "people devoid of any economic, political or even artistic value, who contribute nothing to the prosperity, power and glory of society. This "useless class" will not merely be unemployed — it will be unemployable". 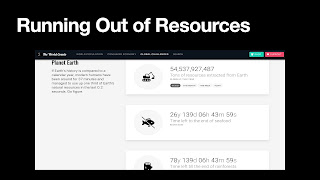 More people requires more food, more transportation, more, more and more! Earth is finite and according to "The World Counts" we are running out fast. https://www.theworldcounts.com/challenges/planet-earth

Vaclav Smil writes in his book, How the World Really Works, that agriculture without carbon emitting fertilizers can only suppport around 4 billion people. 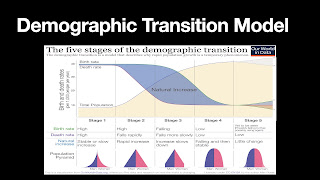 The Demographic Transition Model shows us that population growth is a temporary phenomena, but will the growth end in time? We are currently somewhere in phase 3. Growth will end for one reason or another. It could be because we decide to solve it or that we run out of resources. 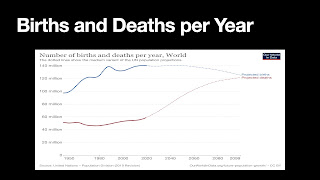 In this graph we see that the number of births has topped out at around 140 million per year while the number of deaths is only increasing slightly. This is due to a lot lower childhood mortality and because we are living longer across the globe.

Less people need to be born 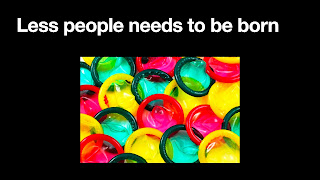 Less people need to be born. How do we achieve that? It is not as controversial as killing people or letting them die. A person who isn't conceived doesn't have any human rights. An uncontroversial idea is contraceptives to everyone who wants them.

Another popular argument is to educate women since educated and working women apparently have fewer children.

More controversial is legislation that discourages having many children. China's controversial 1 child policy was a version of this. It's been abandoned and China now encourages 2 and allows 3 children to stem its aging population. https://www.scmp.com/news/china/politics/article/3141860/china-confirms-all-citizens-can-now-have-third-child-amid 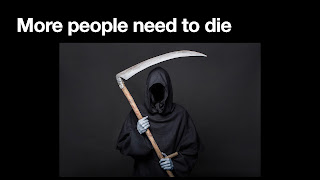 More people need to die. Luckily, we are all mortal and we will eventually all die. But, is there any way to speed it up without violating human rights? Abortion? Euthanasia? What else? 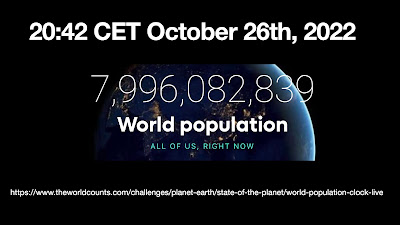