A Not Very Short Introduction to Docker

This is the notes that accompany my presentation called Docker, the Future of DevOps. It turned out, quite fittingly, to be a whale-sized article :).

What Is Docker And Why Should You Care?

Contrary to many others I believe that saying that Docker is a lightweight virtual machine is a very good description. Another way to look at Docker is chroot on steroids. The last explanation probably doesn't help much unless you know what chroot is.

On the Host running the VM there is only one process running on the Host even though there are many processes running in the VM.

On the Host running the Docker Engine all the processes running are visible. The contained processes are running on the Host! They can be inspected and manipulated with normal commands like, ps, and kill.

Now when everything is crystal clear, what does this mean? It means that Docker containers are smaller, faster, and more easily integrated with each other than VMs as the table illustrates. 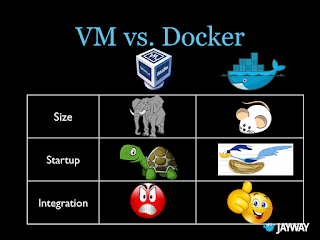 Integrating virtual machines running on the same host must be done by setting up the networking properly. Integrating containers is supported by Docker out of the box.

So, containers are lightweight, fast and easily integrated, but that is not all.

Docker is a Contract

Operations want to use the same as they used yesterday, what they used last year, because it is proven, it works!

(Yes, I know this is stereotypical, but there is some truth in it :)

But, this is where Docker shines. Operations are satisfied because they only have to care about one thing. They have to support deploying containers. Developers are also happy. They can develop with whatever the fad of the day is and then just stick it into a container and throw it over the wall to Operations. Yippie ki-yay! 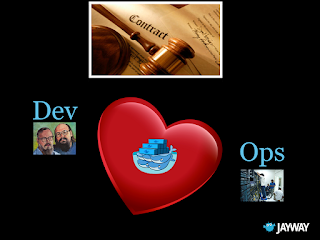 But, it does not end here. Since Operations are, usually, better than development when it comes to optimizing for production, they can help developers build optimized containers that can be used for local development. Not a bad situation at all.

A few years ago, before virtualization, when we needed to create a new service, we had to acquire an actual machine, hardware. It could take months, depending on the processes of the company you were working for. One the server was in place we created the service and most of the time it did not become the success we were hoping for. The machine was ticking along with a CPU utilization of 5%. Expensive!

Then, virtualization entered the arena and it was possible to spin up a new machine in minutes. It was also possible to run multiple virtual machines on the same hardware so the utilization increased from 5%. But, we still need to have a virtual machine per service so the we cannot utilize the machine as much as we would want.

Containerization is the next step in this process. Containers can be spun up in seconds and they can be deployed at a much more granular level than virtual machines. 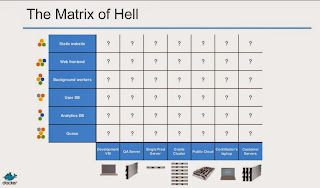 It is indeed nice that Docker can help us speed up our slow virtual machines but why can't we just deploy all our services on the same machine? You already know the answer, dependency hell. Installing multiple independent services on a single machine, real or virtual, is a recipe for disaster. Docker Inc. calls this the matrix of hell. 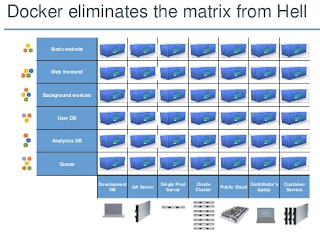 Docker eliminates the matrix of hell by keeping the dependencies contained inside the containers.

How Does Docker Work?

Docker is implemented as a client-server system; The Docker daemon runs on the Host and it is accessed via a socket connection from the client. The client may, but does not have to, be on the same machine as the daemon. The Docker CLI client works the same way as any other client but it is usually connected through a Unix domain socket instead of a TCP socket.

The daemon receives commands from the client and manages the containers on the Host where it is running. 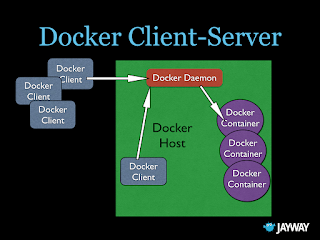 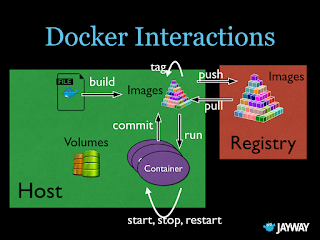 We can build an image from a Dockerfile. We can also create an image by commiting a running container. The image can be tagged and it can be pushed to and pulled from a registry. A container is started by runing or createing an image. A container can be stopped and started. It can be removed with rm. 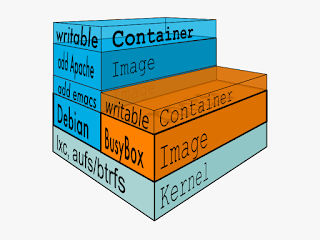 An image is a file structure, with meta-data for how to run a container. The image is built on a union filesystem, a filesystem built out of layers. Every command in the Dockerfile creates a new layer in the filesystem.

When a container is started all images are merged together into what appears to the process as unified. When files are removed in the union file system they are only marked as deleted. The files will still exist in the layer where they were last present.

Here are some data on commonly used images:

Since every command in the Dockerfile creates a new layer it is often better to run similar commands together. Group the commands with and and split them over several lines for readability.

The ordering of the lines in the Dockerfile is important as Docker caches the intermediate images, in order to speed up image building. Order your Dockerfile by putting the lines that change more often at the bottom of the file. ADD and COPY get special treatment from the cache and are re-run whenever an affected file changes even though the line does not change. 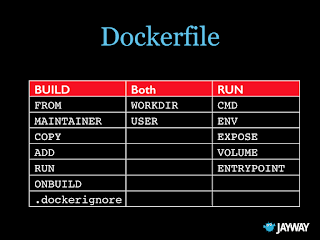 Both BUILD and RUN Commands

When a container is started, the process gets a new writable layer in the union file system where it can execute.

Since version 1.5, it is also possible to make this top layer read-only, forcing us to use volumes for all file output such as logging, and temp-files.

As the list above describes, docker run is the command used to start new containers. Here are some common ways to run containers. 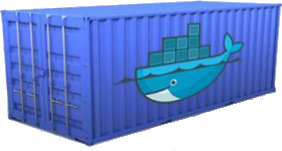 This is the way to run a container if you want to interact with it as a normal terminal program. If you want to pipe into the container, you should not use the -t option.

Linking a container sets up networking from the linking container into the linked container. It does two things:

The linked networking is not constrained by the ports EXPOSEd by the image. All ports are available to the linking container.

It is also possible to limit how much access the container has to the Host's resources.

Setting CPU shares to 512 out of 1024 does not mean that the process gets access to half of the CPU, it means that it gets half as many shares as a container that is run without any limit. If we have two containers running with 1024 shares and one with 512 shares the 512-container will get about 1 fifth of the CPU shares.

docker exec allows us to run commands inside already running containers. This is very good for debugging among other things. 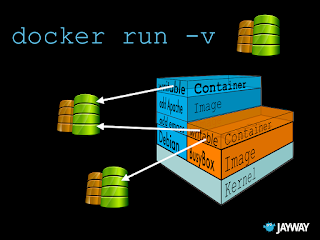 Volumes provide persistent storage outside the container. That means the data will not be saved if you commit the new image.

Since the directory of the host is not given, the volume is created in /var/lib/docker/volumes/ec3c543bc..535.

The exact name of the directory can be found by running docker inspect container-id.

It is also possible to mount volumes from another container with --volumes-from.

Docker Hub is the official repository for images. It supports public (free) and private (fee) repositories. Repositories can be tagged as official and this means that they are curated by the maintainers of the project (or someone connected with it).

Docker Hub also supports automatic builds of projects hosted on Github and Bitbucket. If automatic build is enabled an image will automatically be built every time you push to your source code repository.

If you don't want to use automatic builds, you can also docker push directly to Docker Hub. docker pull will pull images. docker run with an image that does not exist locally will automatically initiate a docker pull.

It is also possible to host your images elsewhere. Docker maintains code for docker-registry on Github. But, I have found it to be slow and buggy.

A lot of commands are available for inspecting containers:

I will only elaborate on docker ps and docker inspect since they are the most important ones.

To get the id of a container is useful for scripting.

docker inspect can take a format string, a Go template, and it allows you to be more specific about what data you are interested in. Again, useful for scripting.

Use docker exec to interact with a running container.

Use volumes to avoid having to rebuild an image every time you run it. Every time the below Dockerfile is built it copies the current directory into the container.

To avoid the rebuild, build the image once and then mount the local directory when you run it. 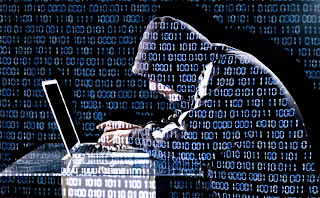 You may have heard that it is not secure to use Docker. This is not untrue, but it does not have to be a problem.

If you own all the containers running on the server, you don't have to worry about them interacting with each other maliciously.

I put "options" in quotes since there are not really any options at the moment, but a lot of players want to get in the game. Ubuntu is working on something called LXD and Microsoft on something called Drawbridge. But, the one that seems most interesting is the one called Rocket.

Rocket is developed by Core OS, who is a big container (Docker) platform. The reason for developing it is that they feel that Docker Inc. are bloating Docker and also that they are moving into the same area as Core OS, which is container hosting in the cloud.

With this new container specification they are trying to remove some of the warts which Docker has for historical reasons and to provide a simple container with support for socket activation and security built in from the start. 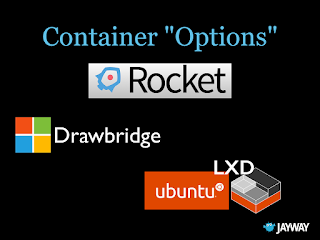 When we split up our application into multiple different containers we get some new problems. How do we make the different parts talk to each other? On a single host? On multiple hosts?

Docker solves the problem of orchestration with on single host with links.

To simplify the linking of containers Docker provides a tool called docker-compose. It was previously called fig and was developed by another company which was recently acquired by Docker. 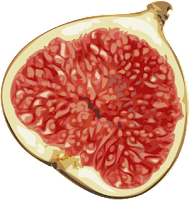 docker-compose declares the information for multiple containers in a single file, docker-compose.yml. Here is an example of a file that manages two containers, web and redis.

To start the above containers, you can run the command docker-compose up.

As you can see from the above commands, scaling is supported. The application must be written in a way that can handle multiple containers. Load-balancing is not supported out of the box.

A number of companies want to get in on the business of hosting Docker in the cloud. The image below shows a collection. 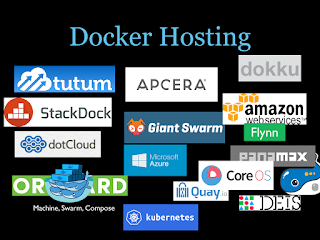 These provider try to solve different problems, from simple hosting to becoming a "cloud operating system". I will only elaborate on two of them

As the image shows, Core OS is a collection of services to enable hosting of multiple containers in a Core OS cluster. 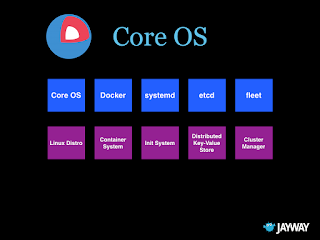 It is possible to host Docker containers on Amazon in two ways.