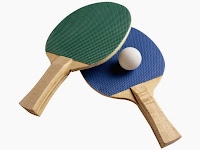 The description from the C2 Wiki reads:

Two programmers sit in from of one computer, with one keyboard and one screen.

Ping-pong pairing is great in a learning context because it keeps both programmers in front of the keyboard and it encourages conversation.

What if we alter the setup to give each user their own computer, keyboard, screen, rubber duck, or whatever tickles their fancy? It would seem that this isn't paring any more! But, if we place the pair side-by-side and let them communicate over Git, we actually get a very nice flow. There is still only one person typing on the keyboard at a time, but they are typing on their own keyboard.

The pattern above is changed to:

I've tried this pattern on a couple of code retreats and it is actually pretty smooth. To make it even more smooth I implemented a simple command line utility, tapir that allows for simple communication between the two computers and automates the pulling of the new code. It works like this. Each programmer starts a listener on their machine that pulls the code when it receives a message.

Now, instead of calling git push, you call ./push and the code is automatically pulled on the other machine, eliminating one step from the loop.

Ping-pong pairing over Git is nice! If you are interested in trying it out I have a roman numerals kata with setup code for multiple languages, currently: Clojure, ClojureScript, Javascript, Lua, VimScript, Objective-C, PHP, Ruby and C.

The tapir command line utility is also pretty interesting as it uses ServerSentEvents to communicate over a standard http server, http://tapir-server.herokuapp.com/

Why is the utility called tapir? Because, pingpong and ping-pong were already taken and I like tapirs! :).